The newest BlackBerry phone, the Q5, goes on sale in Canada in a couple of weeks:

BlackBerry Ltd. says it will launch its “fun and youthful” Q5 smartphone in Canada next month in time for the back to school shopping season.

BBM will be great on this hip, cool and ever reliable BlackBerry Q5!

This sounds a lot like it was cooked up by some 50 year old marketing folks. No offense – I’m over 50 myself – but I’m not the target market here. “Fun and youthful”? Really? The Facebook page looks as corporate as corporate can be. Why no pictures of these “youths” (I’m channelling the movie My Cousin Vinny here) using the Q5?

Forbes isn’t too sure of their success in this market either:

There is a market for the Q5, but I don’t think it’s the youth orientated market that BlackBerry is hoping for. I could see a lot of Q5s being bought in the enterprise sector for the ‘junior’ team members, and they would all be grudgingly used. The Q5 relies on the BlackBerry name to sell, because in terms of functionality, looks, styling, and apps, the competition is just too good.

If there was ever a time to actually ask some kids what they think of the phone, now is it. Though it may be a bit too late. But I’m pretty certain nobody is going to be throwing the word “hip” around.

People make mistakes. Nobody is perfect. And it should be a sign of character to admit to your mistakes.

So why is it that politicians seem unable to admit their mistakes?

Waterloo Region councillors introduced the green bin for composting kitchen waste a couple of years ago. Uptake by local citizens has been slower than they would have liked. And they committed themselves – some would say overcommitted – to a very expensive 10 year processing deal:

When a new contract starts in October, taxpayers will spend $654 to turn a tonne of kitchen waste into compost that enriches farm fields, The Record has found in tallying costs. That’s five times the cost to dump the same garbage ($132).

But it wasn’t a mistake.

“We’re not getting value for money. And that’s quite clear,” Waterloo Coun. Sean Strickland said.

He resists the argument that council messed up in launching an expensive program that some cities have rejected and then misjudging use and processing.

No really, it wasn’t.

“It’s disappointing,” Kitchener Coun. Jim Wideman said. “I don’t think (council) made a mistake. I think that we made certain assumptions about what our tonnages would be.”

Councillors made the decision to start the program. To commit to a 10 year agreement at a high tonnage. But they didn’t make a mistake.

Nope. It’s your fault for not using the green bin that you didn’t ask for. So now they may have to punish you for your “mistake”:

So now I’m wondering, once they have finished spending $818 million or so on the LRT, and the ridership numbers aren’t high enough, will that be your mistake  too? Of course it won’t be theirs. They won’t even be around then.

So will ridership be increased by muscling people into taking the LRT? Perhaps banning cars from the downtown core, or charging congestion fees?

Whatever happens, just remember, it’s your mistake, not theirs. After all, you elected them.

There are days when everything is going wrong and you’d just like to walk away from everything.

This was one of those days.

Today is my dad’s 87th birthday. We spent the day at his place celebrating, ending with a nice Black Forest cake.

Thankfully he is healthy and seems to be unable to slow down, still acting as if he was 50.

Now isn’t that a great way to spend a day?

The Lincoln Memorial is one of my favorite places in Washington, DC. So I have no idea what would possess vandals to throw green paint on the statue:

The apparent vandalism was discovered around 1:30 a.m. Friday on the statue, the pedestal and the floor, U.S. Park Police said. No words, letters or symbols were visible in the paint.

The marble Lincoln statute had green paint on its shins, chair and base, as well as on the floor of the memorial building.

No matter what the motivation was, there can be no reason for such baseless desecration. It won’t leave permanent markings, but I just don’t get the point.

It seems that the Ontario Liberal government “recently discovered” 3,226 backup tapes which may contain emails relating to the recent gas plant cancellation scandal. It’s going to cost a little bit to check them out:

The tab would be between $1.7 million and $3.5 million depending on how the complicated process unfolds, Kevin Costante, deputy minister of government services, advised the legislature’s justice committee in a letter.

There are no guarantees the tapes, some of which date to 2010, contain emails requested by the committee last month on the cancelled power plants in Oakville and Mississauga, said ministry spokeswoman Jenna Mannone.

This of course begs the question – “Shouldn’t you know where you keep your backup tapes?”. Or were these just the ones that they forgot to destroy in the process of “deleting unnecessary information”. And only the government would pay a minimum of $530 per tape, or $65 per hour, to restore tapes, search them, and print out some documents.

A few months ago Premier Wynne, who claims she was not involved in the issue, called for the release of all related documents:

Premier Kathleen Wynne says the move to cancel planned gas plants in Oakville and Mississauga was a “political decision” and called for all documentation related to the plants, across all ministries, to be released.

Her tune seems to have changed now:

At the premiers’ conference in Niagara-on-the-Lake, Wynne said the “emails are being released as the committee asks for them.”

“I’ve been extremely clear from the beginning of my tenure as premier that, as the committee asks for information, they were going to get it,” Wynne added.

Now the story is “we’ll release it if you just ask the right question”. Perhaps that’s because she might have been a bit more involved than she claimed?

I doubt this issue will ever be resolved.

Various groups have tried to come up with the definitive set-top box, allowing them to control the gateway to the “first screen” – your television. Cable companies want to own that real estate. I prefer Apple TV myself. And now Google is getting in on the game with Chromecast:

Introducing Chromecast
To help make it easy to bring your favorite online entertainment to the biggest screen in your house—the TV—we’re introducing Chromecast. Chromecast is a small and affordable ($35) device that you simply plug in to your high-definition (HD) TV and it allows you to use your phone, tablet or laptop to “cast” online content to your TV screen. It works with Netflix, YouTube, Google Play Movies & TV, and Google Play Music, with more apps like Pandora coming soon. With Chromecast, we wanted to create an easy solution that works for everyone, for every TV in the house. 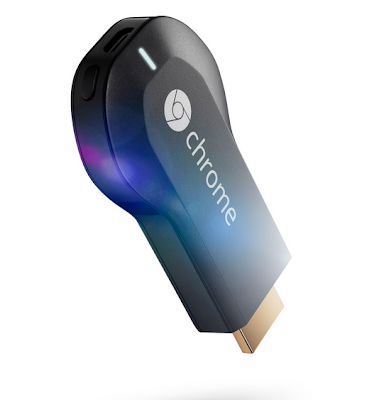 I already have this functionality with Apple TV and AirPlay, but it is still a pretty interesting and inexpensive idea.

Scientists have found that dolphins use unique whistles to call each other by name:

The researchers found that individuals only responded to their own calls, by sounding their whistle back.

It is likely that dolphins have their own complex language, but we seem at a loss to understand it. We know so little about the world we live in.

I often contend that humans aren’t the smartest species on the planet, but we are the most arrogant.

There is longstanding support for confidentiality of sources or reporter’s privilege, even in international law:

Simply put, it means that the authorities, including the courts, cannot compel a journalist to reveal the identity of an anonymous source for a story. The right is based on a recognition that without a strong guarantee of anonymity, many people would be deterred from coming forward and sharing information of public interests with journalists. As a result, problems such as corruption or crime might go undetected and unchallenged, to the ultimate detriment of society as a whole.

But now a U.S. Federal Appeals Court has determined that doesn’t matter:

The three judges in the Fourth U.S. Circuit Court of Appeals have ruled that neither the First Amendment, nor a significant body of case laws concerning the protection of anonymous sources used by investigative journalists. will save James Risen from having to testify in the case of Jeffery Sterling. While most journalists are acutely aware of the current climate for whistleblowers and leakers of state secrets, this decision will likely further discourage potential sources from seeking out journalists to tell their stories and establishes a very worrying precedent.

At what point does the law actually matter?

If whistleblowers have no protection, as seems to be the case with this ruling. what is the likelihood that we will ever hear of problems occurring? Next to none I’d guess.

After an intensive lobbying campaign by the banks, Mary L. Schapiro, the S.E.C.’s chairwoman, approved the new copper funds last December, during her final days in office. S.E.C. officials said they believed the funds would track the price of copper, not propel it, and concurred with the firms’ contention — disputed by some economists — that reducing the amount of copper on the market would not drive up prices.

Yes, because the banks says so, it must be true, despite what economists say.

I started wondering what the S.E.C. actually does and I found this on their web site:

The mission of the U.S. Securities and Exchange Commission is to protect investors, maintain fair, orderly, and efficient markets, and facilitate capital formation.

The article I quoted from above explains how Goldman Sachs profits from storing and moving aluminum, without actually delivering much:

The story of how this works begins in 27 industrial warehouses in the Detroit area where a Goldman subsidiary stores customers’ aluminum. Each day, a fleet of trucks shuffles 1,500-pound bars of the metal among the warehouses. Two or three times a day, sometimes more, the drivers make the same circuits. They load in one warehouse. They unload in another. And then they do it again.

This industrial dance has been choreographed by Goldman to exploit pricing regulations set up by an overseas commodities exchange, an investigation by The New York Times has found. The back-and-forth lengthens the storage time. And that adds many millions a year to the coffers of Goldman, which owns the warehouses and charges rent to store the metal. It also increases prices paid by manufacturers and consumers across the country.

And the S.E.C. has just agreed to let them do that with copper too. Maintain fair, orderly, and efficient markets? For the banks sure. Just not for anyone else. Everyone else just pays more.