Mini-Microsoft has an excellent post about stack ranking in staff reviews and the effect they have on employees:


I am just tired of our busted review model. Stack ranking is just plain wrong. Yes, you need to have a yearly review system. I absolutely believe that. You need to reward the super contributors well. But the amount of angst and anger that goes into the getting the review model done poisons all of us. If my report decides, “>Dang it, I’m getting a 4.0 by any means necessary,” well, they are going to find some very easy ways to get that 4.0, and most of those easy ways are going to be self-centric and focused around decreasing / inhibiting the performance of their peers so that they can have better results:

I’ve also seen what happens in some companies where this model is used to justify no raises at all to employees who are doing exactly what is asked of them, which leads to a deflationary pay spiral, and then to a much-lower-than-industry pay scale.

By all means reward exceptional employees, but also make some provision for cost of living increases for employees who are doing their jobs. You may not want to reward average employees for being average, but if your company is growing, then they are the ones who are helping it to do so – it can’t be just the few heroes. When they figure out that the company is reaping a windfall on their backs, they’ll leave, taking their valuable knowledge with them. Sometimes they’ll even got to work for your customers and competitors. And they’ll tell everyone they meet about how the company mistreated them.

You really don’t want to be that company. Because reputations are very expensive – to create, and to rebuild.

I find it a bit ridiculous that people feel the need to attack Google just because it has become big and successful. Even from the New York Times, no less:


But instead of embracing Google as one of their own, many in Silicon Valley are skittish about its size and power. They fret that the very strengths that made Google a search-engine phenomenon are distancing it from the entrepreneurial culture that produced it – and even transforming it into a threat.

“I’ve definitely been picking up on the resentment,” said Max Levchin, a founder of PayPal, the online payment service now owned by eBay. “They’re a big company now, doing things people didn’t expect them to do.”

But David Pogue has a slightly different take in today’s Times:


If you hadn’t noticed, Google is no longer just an Internet search tool; it’s now a full-blown software company. It develops elegant, efficient software programs – and then gives them away. In today’s culture of cynicism, such generosity and software excellence seems highly suspicious; surely it’s all a smokescreen for a darker, larger plot to suck us all in. What, exactly, is Google up to?

In a single week, then, Google, the software company, addressed deficiencies in Windows, tried to create a grand unified chat and voice network, and opened its clean, capable, capacious e-mail system to all comers. All of this software is beautifully done, quick to download and fun to use – not to mention free and (apart from the Gmail service) entirely free of ads and come-ons.

Wish they’d cut it out. Trying to figure out what this company’s really up to is enough to drive you crazy.

It just sounds like the folks at Google are having a great time doing whatever then darn well please. And in the process, they’re probably driving their competitors crazy trying to keep up with them.

The Canadian government bought off the province of Sasketchewan with $147 million in gas tax money:


Saskatchewan municipalities will benefit from more than $147 million, over five years, in federal gas tax funding to be used for environmentally sustainable municipal infrastructure and to fund increased municipal planning capacity. Funding totalling $17.7 million will flow in the first year, ramping up to $59.1 million in year five, continuing at that level thereafter.

“Today’s agreement marks a new partnership,” stated Prime Minister Martin, “one that will help ensure Saskatchewan’s municipalities have the tools they need to grow stronger, more sustainable and to ensure a higher quality of life for their residents. Saskatchewan’s cities and communities have stressed the need for new sources of funding, and for a voice in how those investments are made. We’ve listened.”

Interestingly enough, assuming that one quarter of residents drive (244,733 people), using about 2500 litres annually at $1 per litre, a rebate of the GST alone would come to about $214 million over five years. The government got off cheap.

Chris Pirillo has an excellent rant about the stupidity of multiple incompatible IM clients:


Remember how you couldn’t send emails to your friends who used Eudora, because you were using Pine? That’s because it never happened. That shortcoming would never fly, yet we put up with these exact bugaboos on a regular basis. I’m getting real close to dropping all IM activity altogether until the brands get their acts together.

I agree wholeheartedly. It is ridiculous that this kind of thing is allowed to limit the huge benefits of instant communication.

And personally I wonder why after all of these years we have yet to agree on one common way of sharing address book and identity information. Outlook, Thunderbird, PDAs, and phones – all of them use a different format, making it extremely painful to share that information.

The University of Texas is going bookless:


When students wander into the former undergraduate library at the University of Texas this fall, gone will be the “Quiet Please” signs, the ban on cheeseburgers or sodas, the sight of solemn librarians restocking books.

The fact is, there will be no more books to restock. The UT library is undergoing a radical change, becoming more of a social gathering place more akin to a coffeehouse than a dusty, whisper-filled hall of records. And to make that happen, the undergraduate collection of books had to go.

This summer, 90,000 volumes were transferred to other collections in the campus’s massive library system – leaving some to wonder how a library can really be a library if it has no tomes.

So can it still be called a library? UT administrators don’t seem to think so:


So to ease some of the apprehension, administrators took the word “library” out of their vocabulary when referring to the Flawn Academic Center. When classes start Aug. 31, it will be filled with colorful overstuffed chairs for lounging, barstools for people watching, and booths for group work. In addition to almost 250 desktop computers, there will be 75 laptops available for checkout, wireless Internet access, computer labs, software suites, a multimedia studio, a computer help desk and repair shop, and a cafe.

I use the internet far more than I ever use a library these days, but I miss the serendipity of wandering the stacks and happening upon a book that looks interesting to read. Though I may happen upon interesting things on the net, I’ll seldom devote the time and patience to them that I would to a good book. I’d hate to think that pleasure is gone forever.

It turns out that Elisa Camahort was also looking for someone to talk to late last night.

It’s just no fun trying out a cool new social interaction tool when there’s nobody to interact socially with.

I’m running Google Talk, Google’s new IM client. Currently it doesn’t seem to work with anything but other Gmail users, so I can’t do a lot with it.

It might have been a bit more effective initially if it supported users of other services.

Hey, it supports voice as well, but who can I really call at this time of the night. I see that they’ve carefully noted that they are not a telephony service:


Google Talk is not a telephony service and cannot be used for emergency dialing.

It seems that Dell has changed their tune about Jeff Jarvis’ complaint regarding his problems with their computers. Jeff makes this comment:

I’m not so sure. Jeff complained numerous times on his blog, others commented on the situation, and even the mainstream media published articles on the subject. And after all that bad press, Dell eventually decided to do something about it.

I somehow doubt that an email from me would have had the same effect on a company that just doesn’t seem interested in listening to their customers.

Bob Tarantino shoots some holes in Ben Carniol’s comments that the underlying cause of violence is budget cuts to social services:


Couple of things to note: one, “budget cut-backs” have not been occurring for “twenty years”. Significant cuts to spending (i.e., actual reductions in aggregate dollar amounts, as opposed to marginal reductions in the annual increase of spending) really only materialized starting in 1995 (with the Chretien Liberal downloading of around $40 billion in spending, the Mike Harris cuts and the Ralph Klein cuts). But more importantly, look at the StatsCan charts provided here. Notice something? Violent crime, measured per capita, skyrockted from the early 1960s until the early 1990s – precisely the time during which the Canadian welfare state was being erected and funded with so much money that people started talking about Canada’s debt load approaching Third World levels. Which was well before “tax cuts” were enacted. The salient point is that Carniol’s description of the world is precisely backwards: crime hasn’t increased in the wake of lower levels of social spending – it has decreased. And crime didn’t fall during the decades that social spending increased – it nearly quadrupled. Which isn’t to say that social spending and crime levels are causally related – rather, if they are related it is in precisely the opposite way which Carniol wants us to believe. 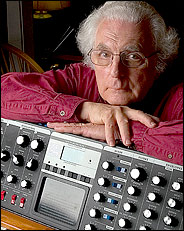 Robert Moog, the creator of the Moog synthesizer, died Sunday.

The work of Robert Moog influenced not only my musical tastes but the progression of music in general, and was certainly a factor in my decision to become an engineer.